Earlier this year, I logged onto a concert website, that listed a bunch of upcoming gigs near me and nearly screamed. Seeing Gretta Ray live, plus the amazing pork burger and hipster cider I had before the show, was worth so much more than the whopping total of $30 that I ended up spending for the whole experience. So much more. I am eternally blessed.

If you don’t know about Gretta, now you do. You have no excuse.

Now this is going to be so embarrassing if she reads this and has no recollection of any of this, but years ago, when I first started posting on SoundCloud, Gretta followed me. She followed me. She had posted a few of her songs on there, and there’s one, Unexpected Feeling, that did it for me. So I DM’d her and told her how much I loved her music. And she replied. But that was that, I think we spoke once after that about our own music, but that was it. And I’m so happy for this girl.

Last year, Gretta won the Triple J Unearthed High competition for Drive, which you can watch here. Drive is another fantastic song. She was also successful in the Vanda and Young Songwriting Competition which was also last year. Since then, things have been nuts for Gretta.

Following high rotation of Drive on Triple J, a popular radio station here in Australia, Gretta joined the lineup of several music festivals, released an EP and then did her own national tour. Which is where I was headed in April.

It was a pretty intimate venue, with about 300 people there. I don’t think I looked back once during the performance, but if I did I definitely would have appreciated the pure luck that somehow got my two friends and I right to the front at the start of the gig.

It was honestly like watching one of the girls from school on stage killing it. And I mean that in the nicest, best way. She was like a goofy friend, cracking some banter with the audience and laughing off her nervous ramblings by ranting about the food at the venue (shoutout to The Howler, Melbourne) that she thoroughly enjoyed. I can attest, the pork burger was a killer. Watching her and the band muck around with each other was equally as pleasing as the amazing music she performed.

A crowd favourite was definitely Drive. It is, after all the song that started of this ridiculously amazing run for Gretta. Listening to the rest of the audience scream the bridge along with my friends and I was such a feeling, I honestly can’t describe it, and the grin on her face was all the more rewarding.

However, it was Unexpected Feeling that did it for me. She actually started with a cover of Youth, by Daughter, another incredible song, which she so did justice. She killed the cover. But then the chords shifted slightly and it became Unexpected Feeling. Now you’ve probably heard me say that ‘I screamed’, a few times now, especially if you’ve been reading from the start. Majority of the time, I exaggerate. It adds to the essence of whatever it is I’m writing. I may have gasped or become excited, but most of the time I didn’t verbally shriek. Except for this time. This time, I actually screamed. In a crowd of 300 people, all mesmerised by this angel singing on stage,  I screamed. I have never slapped my hand over my mouth so hard in my life. But still, I regret nothing at all. I also think I may have started crying a little bit during the song. But that’s to be expected.

The song is beautiful. During the show Gretta explained that she actually wrote the song while trying to learn Youth, but stumbled upon the chord progression we hear in Unexpected Feeling. The musicality is insane. Initially, the first version of the song that I heard was a bit more stripped back, which I loved, but adding in the strings fills it out beautifully, and makes it all the more ethereal in my opinion. Her harmonies click perfectly, and watching her execute it just as perfectly live was amazing. The lyrics add another layer to the delicious cake that is this song. I wish I wrote those lyrics. If I wrote those lyrics, I’d probably put down the pen and offer it up as the last lyrics I ever wrote. I don’t know how, she probably will, but I can’t imagine writing better lyrics than the ones in this song. It’s so sad, but you kind of overlook how beautifully grim the words are due to how magical she makes them sound. Add in the previously mentioned string section, the light tapping on the wood of the guitar and Bob’s your uncle. Incredible. 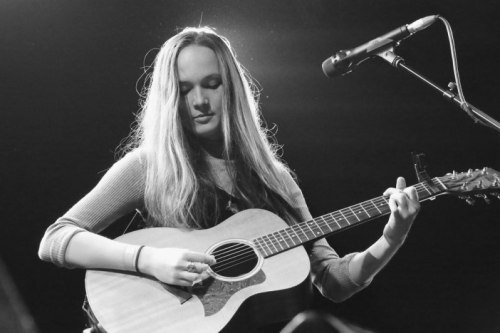 If you do anything today, in any spare moment you have, please listen to anything by Gretta. Everything she touches is amazing. And like I mentioned, her lyrics. In my life, I have never heard such beautiful lyrics like Gretta’s. She is definitely a phenomenal singer, but her songwriting is such a skill, and from someone who is my age, from my state, doing the things I love to do, it’s such an inspiration to see her killing the game. And now she’s touring along the East Coast with Vance Joy! She already toured with Japanese Wallpaper and Vera Blue, amazing musicians who you should also check out, but this pairing (Ray and Joy), is such a perfectly fitting one, I’m desperately hoping I can make it to one of the shows.

Just because it could possibly give you an idea of how fantastic this girl is live, here’s a link to her Sofar Melbourne performance, which I wish I could have gone to.

If you ever get the chance to see Gretta Ray live, take it. Please. I beg of you. I am so grateful I did.

11 thoughts on “Get Around Gretta”