Aka: The best day of my life so far.

I say so far, because while this was such an incredible, magical day, my best friends/family and I have so much planned this year, that I’m sure I’ll be getting real familiar with the feeling throughout 2018.

Let Go Fest is a new day-long festival, only in it’s second year, that takes place at the beginning of the year at the Mornington Peninsula Racecourse. It was my first festival and it could not have gone better.

I stayed at my best friend Jess’ house on the night of the 2nd, and after an incredibly restless sleep we were up on Saturday the 3rd, ready to start the day, beginning with the legend that is my other best friend, Kate, announcing her arrival with chai lattes and a huge grin.

Then we began the process of makeup. Gotta be honest, I went in with a plan and ended up winging it completely, though I was happier with the outcome than I was with the initial plan I had in mind. It was a good makeup day. After a quick breakfast we went back downstairs to get dressed, douse ourselves in glitter and then headed out to catch the train. We were amongst the first couple of people to get to the station, catching one of the first shuttle buses from the station to the racecourse. It was a short wait in line, but once we passed through we were in and it was fantastic. The first act we wanted to see started at 2, so we took the chance to take a ride on the free ferris wheel and have a walk around. 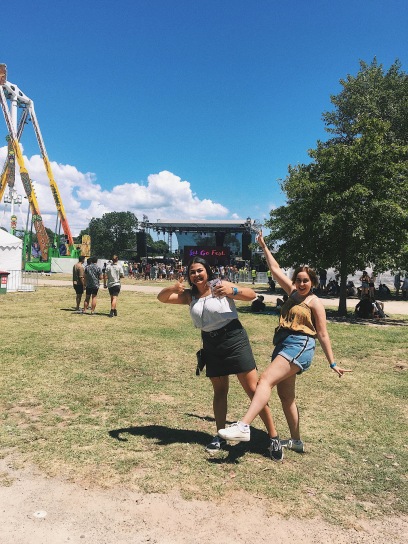 The first of a series of smart moves we made that day, was catching the end of Joyride. We made it for the last few songs of their set and as people started to move off after they finished we made our way to the front and chilled out against the barrier. Made some friends, complained about the heat, the usual stuff. Though she was ten minutes late, Ecca Vandal was one of my major highlights of the day.

Well first of, like I mentioned, we were right at the front. Second of all, I’ve been obsessed with her, especially her song Future Heroine which I’ve mentioned in several monthly favourites and playlists. Along with these iconic pictures, I also have several videos of her looking straight into my camera and screaming the lyrics back to me. It was amazing. All I remember was singing the lyrics to Jess and Kate, only to have Jess literally scream in my face for me to turn around and having Ecca right in front of me, up against the barrier. Not only that, but the second time she came down to us, the boy next to me and I carried her over the barrier so she could sing half a song in the mosh pit. No security, nothing. It was out of this world.

Jess was incredibly keen to see Middle Kids, who were performing next, so along with our new friends, we remained up near the barrier. Have to share, but due to the intense head banging and copious amounts of drinks that were probably being thrown around the mosh pit, my hair had transformed into an absolute, sticky birds mess. Thanks to the magical creatures that teenage girls are, that was quickly sorted out when a lovely angel sent from heaven made it her mission to get my hair out of my face and throw it back into a french braid. So problem solved.

Then Middle Kids came out.

I should also point out that at this moment, looking back, the crowd had grown huge. We were probably at the front of a three hundred strong mosh pit at the moment, which compared to later on in the night was nothing, but was still an amazing experience. Middle Kids were incredible. They played some of their old stuff, new stuff released the week before and a song that hadn’t even been released yet. It was so amazing to watch them performing, and to see the claw ride, swinging back and forth in the background, appearing up above the stage and raining down screams and cheers from the people on it. 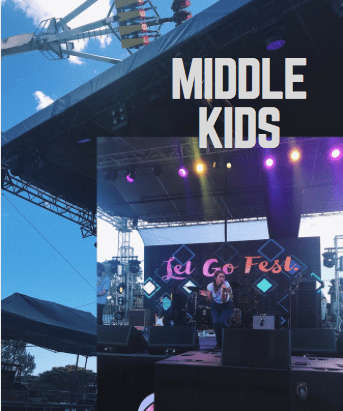 After Middle Kids finished their set, we left our spot at the mosh to go and get some drinks. We waited in a stupid long line for some drink cards before getting our drinks and then we roamed around for a little bit. After some fresh air, we again found ourselves in the middle of the growing mosh pit, catching the end of Allday‘s set. The people in the crowd were incredible to be with, screaming lyrics, lifting strangers onto shoulders and all together sharing a great vibe. We remained in the mosh, closer to the front, for the whole of SAFIA‘s set, Jess climbing onto my shoulders for her favourite song and all of us generally having the time of our lives.

Processed with VSCO with c1 preset

Processed with VSCO with c1 preset

After SAFIA’s set, we left the mosh for another drink and toilet break, and to meet up with my cousin who we were heading home with later. Literally half an hour later we were at the back of the main stage mosh pit, preparing for Gang Of Youths, the headliners. After moving around a bit to try and get a better view since literally 3/4 of the people at the festival were at the main stage, we moved over to the side of the mosh pit. This is where I take full credit for the next move, because it was fantastic. While we were standing there, I overhead an older couple who noticed a spot further up in the front, closer to the side of the stage, and planned their route to get there. Naturally I grabbed Jessica’s hand, who in turn grabbed Kate, and quickly followed behind them, mumbling ‘excuse me’s and ‘sorry’s to the forgiving crowd around us. The view was great from our new spot. Ten times better than where we were, and the people we were around were even better. There’s nothing more energising than screaming the lyrics into a complete strangers face, only to have them respond back with twice the enthusiasm. 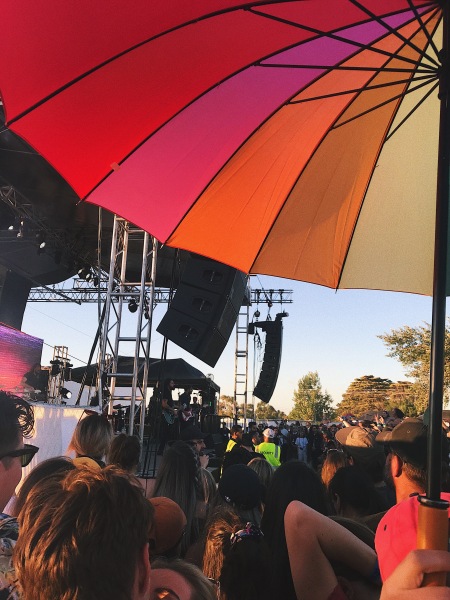 Again, Jess was on my shoulders for her favourite song, and we were all absolutely living, until I literally had to scream at her to turn around to see David, the lead singer of Gang Of Youths, who had climbed down into the crowd with his security, make his way right past us, singing the chorus like the absolutely incredible showman he is. 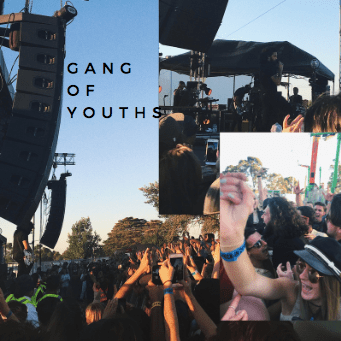 It was one of the bests parts of the entire day, and made the huge crowd, the heat, slight sunburn and sore feet worth it all.

Let Go Fest was an incredible day, and will probably still be one of the highlights of my 2018. It was the happiest I’ve been all year, and it was all down to incredible music, my best friends, amazing weather, a few drinks and an irreplaceable vibe. I plan to make 2018 amazing, and Let Go Fest was the perfect way to kick it all off.