Hello friends! I hope you all enjoyed my latest post, a dedication to the absolute experience that was seeing Bruno Mars live in concert on the 10th. Let’s kick on to the sequel.

So on the 11th of March, literally two days ago, my best friends, Kate and Jess, and I met up on the train (someone count the hours I spend on the train between university and getting to concerts), and found ourselves at Etihad Stadium, a short walk from Southern Cross station, joined by a huge crowd of people, quite obviously preparing themselves for the concert like we were.

We were very aware of the fact that our chances of properly seeing the man in HD were slim. People had been lining up since the early hours of the morning, and by the time we were getting on the train and making our way in, the main door for the mosh had been open for two hours. One thing you have to know about Etihad is this. It’s frigging ginormous. It’s massive. The first time I saw Ed Sheeran, Jess and I managed to find ourselves basically front row of the mosh pit in Rod Laver Arena. Etihad Stadium is a whole other ball game, one that we weren’t willing to play to be quite honest. I had a friend who had been lining up since 2, and was still in the front/middle section of the first mosh pit. Yes you read that correctly, the first mosh pit. But on to that later.

Wait time was next to nothing seeing as the doors had already opened, but we had plenty of time to spare. We found our way to the shortest line, scanned our tickets, got our GA mosh pit wristbands and entered the stadium. After concluding that our stomachs would most definitely not withstand the rest of the night, we bought ourselves some food to eat and made our way out onto the mats. It was insane how big the General Access ground space was. It was so big in fact, that one of the light rigs was literally in the middle of the mosh pit, meaning they split it into two. Those who got there extra early, managed to squeeze themselves into the front mosh, while we were in the second mosh, a bit further back. That said, we were closer to the front of the second mosh pit, so we definitely didn’t have the worst view ever.

Bliss N Esso were the first opening acts, and to their credit, they were fantastic. Not everyone were fans of theirs, I had only heard a few of their songs but knew who they were, and I found myself singing along, joining in whenever I knew the lyrics and genuinely enjoying their set. By the time the second act made her way on stage, the crowd had at least tripled. Partly due to the fact that it was one of Australia’s most loved singers, Ed Sheeran’s musical crush upon his discovery of her during his first trip to Australia years ago, Missy Higgins. Her set was incredible and her songs were all beautiful. Definitely check her out if you haven’t heard of her. She’s been singing for years and years and years, her song Scar broke my 8 year old heart, and it did again when she closed with the song on Sunday night. The entire crowd was singing along and it really lifted the vibe of the entire stadium in preparation for Ed.

And a short twenty minutes later, he was on. I’ve only once, in my life, heard a roar like I did in that moment, and that was when I was in Etihad Stadium three years ago, with Jess and Kate again, seeing One Direction, in their prime. The roar was deafening and the huge crowd surged forward as expected. Still, all we saw was little, teeny, tiny Ed. 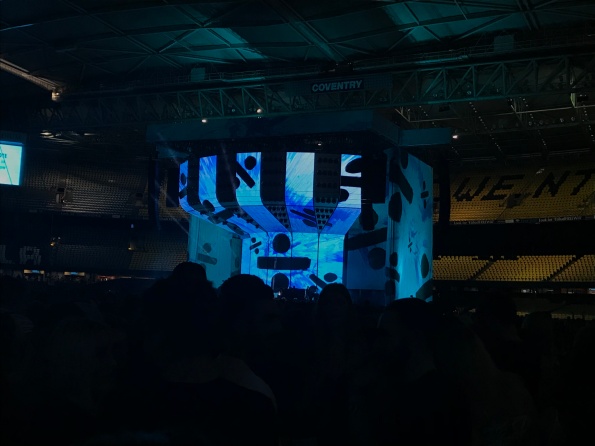 I could quite honestly count on one hand the times I actually saw Ed Sheeran in the flesh, rather than on the giant screens but it didn’t matter at all. The sound he created time and time again, song after song, was so insane, and so admirable, I found myself not even looking at the stage sometimes.

Castle On The Hill was quite possibly the best opening song he could have chosen, and all the songs that followed after were even better. My favourites were definitely his medley from Feeling Good by Nina Simone, into I See Fire, his medley of Don’t and New Man, Bloodstream, Galway Girl, Nancy Mulligan (which caused both the girls to look at me knowingly as I screamed because it’s one of my favourites yet I didn’t expect it to be on the setlist at all), Sing and of course his encore which consisted of Shape Of You and You Need Me, I Don’t Need You, which went absolutely crazy. Bringing the old with the new to close the show was one of the best decisions he made, the crowd went absolutely mental, screaming and shouting whether they knew the lyrics or not. 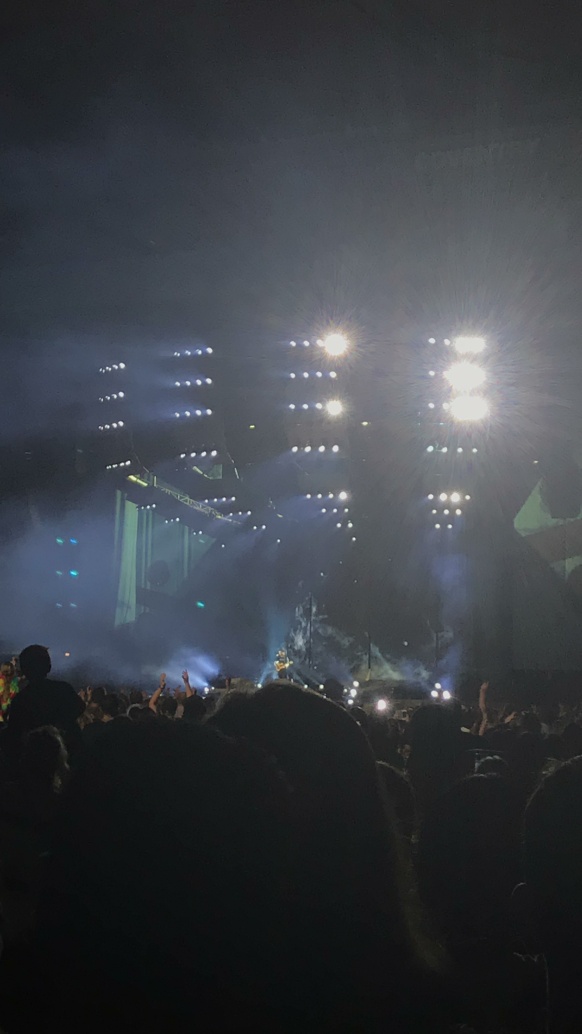 I spoke a lot about the atmosphere in my Bruno Mars post. I can’t compare the two concerts in any way because of how polar opposite they are, and how they appeal to two completely different sides of me as a person, but the atmosphere at Ed Sheeran, was one of the craziest’s I’ve ever experienced in my entire life. When thinking of the size of the crowd, take into consideration that this was a record breaking tour for Ed Sheeran, especially in Australia and New Zealand where he sold more than a million tickets. His four shows in Melbourne sold over 250,000 tickets.

A lot of the awe and just absolutely wonder I continuously found myself feeling, was mainly due to what was happening on stage, or what I could hear of it.

By now, it’s common knowledge that Ed Sheeran doesn’t perform with a band. He doesn’t have a backing track, or pre-recorded samples that he sets up for himself. Everything he does, every sound he made, was with his monster loop pedal and loop board, of which I’m forever envious of, his guitar, and his mouth. The percussion, the harmonies, the choirs you hear on his studio versions, the intricate guitar riffs and the booming bass. All him. Live, on stage, and once he clicks over onto a new track, the previous song is gone forever (a little part of my heart died when he said that).

Knowing that all the sounds and ambience that was filling this bloody huge arena, reaching out to over 60,000 people, was coming from this one man, is still even now, something I can’t wrap my head around. It blows my mind, and it gives me so much respect for him. The atmosphere in that stadium was irreplaceable and one that cannot be replicated.

After the show we were discussing how we all found ourselves, at one moment or another, standing completely still, in a total trance, just watching the screens, I See Fire is one of my absolute, if not, favourite song by Ed Sheeran, specifically because of how emotive it is in translating this really magical story, drawing from such a fantastical film, to create this sound that carries everything it holds and more. It gives me a roundhouse kick to the head of nostalgia from reading fantasy books, old Enid Blyton adventure novels and not questioning the lengths to which authors went to describe magic forests and fairies, old English country-sides and characters that you really can’t begin to imagine existing, and that song captures all of that for me. Perfectly. Take that whole chunk of words I just spewed, put it into a feeling, and that’s all I felt for the entire concert. It didn’t matter if I was screaming back the lyrics in a particularly up-beat song, belting out his slower tunes or dancing along to Shape Of You with my best friends, that’s how I felt for the whole two hours that he was on stage. 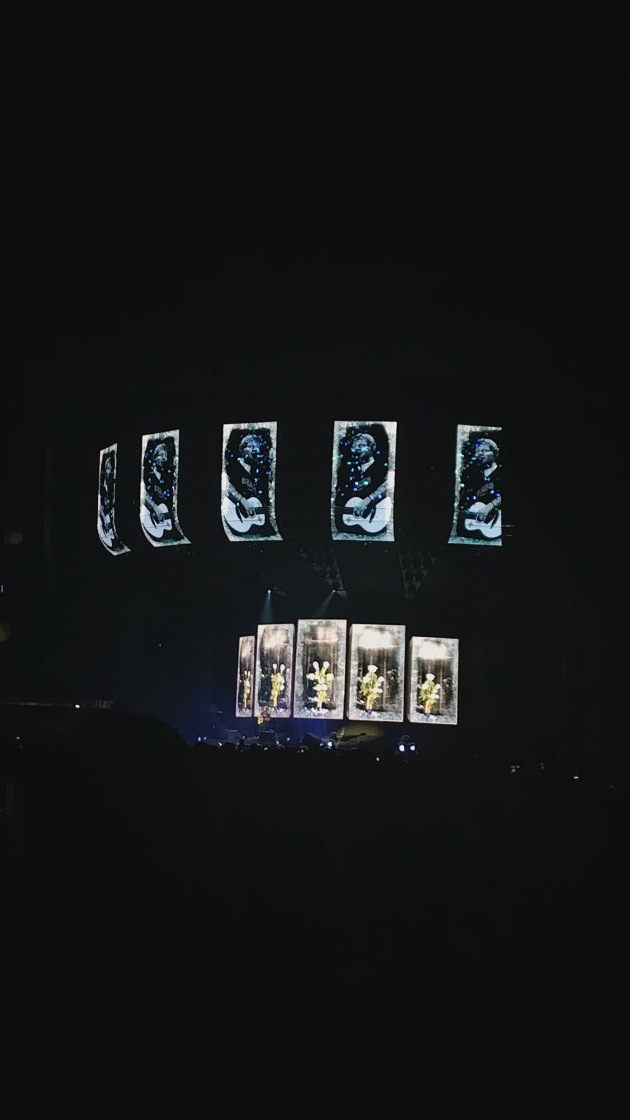 You Need Me, I Don’t Need You was the perfect note to end the night on. Not lyrics wise cos it’s very much an ‘eff you’ type of song, but just due to how much emotion and energy it evokes. He rapped all the verses perfectly, got the crowd so hyped up, got everyone involved, stepped away from the guitar after all the loops were set and looked so at home up on that huge stage. Singing that specific song, with the amount of people who were screaming along with him, felt like the perfect goodbye.

Another concert done, definitely up there with the best, 2018 is shaping up to be quite the year.

10 thoughts on “Ed Sheeran and The Weekend From Heaven…Pt.2”