Today’s post is one of my favourite types of posts to do, ever, and it’s a concert wrap-up/review/reminisce.

If you caught my October Tunes a few weeks back, you may remember one of the artists who featured on there, RINI. He’s also featured on my Australian Music from Australian Artists post, my Songs You Don’t Know But Should post and one of my Quick Shares.

Meaning, I think it’s somewhat fair to say that this gig was a long time coming.

I first saw RINI, in person, before I ever listened to his music anywhere else, and it was at the start of last year, in 2017, while walking to a university lecture. I ended up going late to the lecture because I stumbled upon RINI busking, singing a set on one of the busiest street side walks in Melbourne, Swanston Street. I forced my friend to stand back with me, and we watched and listened to the entire set.

Since then, I’ve been following RINI on Instagram and YouTube, and keeping up with the songs he releases on Spotify.

An EP release was long overdue.

RINI released his album After The Sun at the end of October, and my god did it blow all my expectations out of the water. The album pulls some of the best sounds and songwriting that makes up RINI as an artist and packages them up into a roughly twenty minute, five track taste of what has definitely been on of my favourite artists of this year. 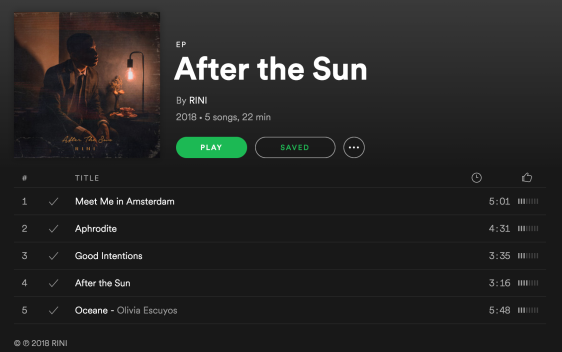 I bought my $14.20 ticket on a Saturday morning at work when one of my close friends/musician buddy/colleague and I realised we both listened to RINI’s music, and the countdown began.

The 20th of November eventually rolled around and we drove into Fitzroy, playing the entire EP through almost twice, as well as a bunch of singles too. It was a great way to hype ourselves up before the show. Once we got to The Workers Club, we got our wrists stamped, and made our way into the intimate, cozy, slightly too hot, space and prepared for the second of three opening acts that we made it for, TRQS.

TRQS had an insane voice. I’ve seen her around on Instagram and YouTube, and listening to her live was just as good. Everyone in the audience was the perfect level of hyped and respectful, which made it easy to see perfectly but still have a boogie. After her set was Olivia Escuyos, another artist who I included on my Australian Music from Australian Artists and oh my goodness, that girls voice. Definitely check out Olivia, she did an incredible cover of Rocket by Beyonce that had literally every single person in the audience cheering and losing their minds.

Since it was ridiculously hot that night, we took the opportunity to make use of the open top beer garden just outside the bandroom to get some air and cool down in between each set. There were quite a few people doing the same thing, but we decided after a little while to head back in, keen not to miss the beginning of RINI’s set.

As we were walking out of the beer garden, I looked up through the glass door, and RINI was just chilling in front of the band room entrance, talking to a bunch of people, so you can bet we hung around for a little bit, eventually getting to have a very decent chat with him and wishing him lucky before the set, before promptly freaking out as soon as he left.

It was a great vibe in the band room. Very much a family feeling throughout the room, especially on stage. The musicians were made up of friends of RINI’s and people who have helped him along the way, putting together the EP with him. The love on stage was palpable.

Before performing the EP, RINI warmed us up with some fan favourites, like Camped, For The Last Time, Emerald and For How Long. Those songs definitely got everyone bopping and singing along, and it was great seeing the awe on RINI’s face when everyone sang each of those songs word for word right back at him. For How Long was one of the standouts for me, considering I’ve been obsessed not only with the song but the video clip too, since it was released. I have to say, I love the switch up with the live performance compared to the studio version, it was a lot more fun to dance to and sing along with, and it was a perfect song to get the crowd involved with, which you can watch below.

Then he moved onto the songs from the EP. Since it’s been released, I’ve been struggling to pick a favourite song, but after the EP launch, I can at least say that it’s a strong competition between Good Intentions, Meet Me In Amsterdam, or Aphrodite, which has been one of my most listened to songs over the last month.

What really struck me throughout the entire performance was how overwhelmingly grateful RINI was. Not only to everyone in the audience for coming to watch and support him, but his family members in the audience, his friends, the band, the photographers on stage, he made sure to thank them all. Every time he brought his hand to his chest and vocalized his thanks, the audience, including us, cheered more and more.

The band was ridiculously good. Everyone played their part, doing the most, but not too much that it took away from the show. It was like every fill the drummer played, all the licks and solos the guitarist and bass played had and the incredible talent of the keys player, were all done with purpose and intent, which makes for a great show to watch not only as an audience member, but as a musician as well. The backing singers were consistent and sounded like angels behind him, blending seamlessly.

Overall, for such a small, intimate show, the room was filled with ridiculous amounts of talent, and the audience was one of my favourites that I’ve ever been a part of. Everyone knew the words to every song, no-one was afraid to have a boogie, and holy moly, some of the people singing in the crowd were nearly on par with the musicians on stage, it was a mosh pit of angels.

It was an amazing gig and EP launch to attend, and I had heaps of fun. It was great to speak to RINI before the show started and thank him for an amazing performance and wish him luck before we left at the end. The entire space felt so welcoming and warm, and not just because it was sweltering and humid inside and out, and it was a super nice atmosphere throughout the entire night. I cannot recommend you list to RINI enough. I have a really huge gut feeling that he’s going to get frikin huge, like Daniel Caesar level shit, and I cannot wait for it.

For such a humble, talented, hard-working person, he deserves it all.

Make sure you check out his EP After The Sun on Spotify and let me know what you think!

4 thoughts on “RINI // After The Sun EP Launch”